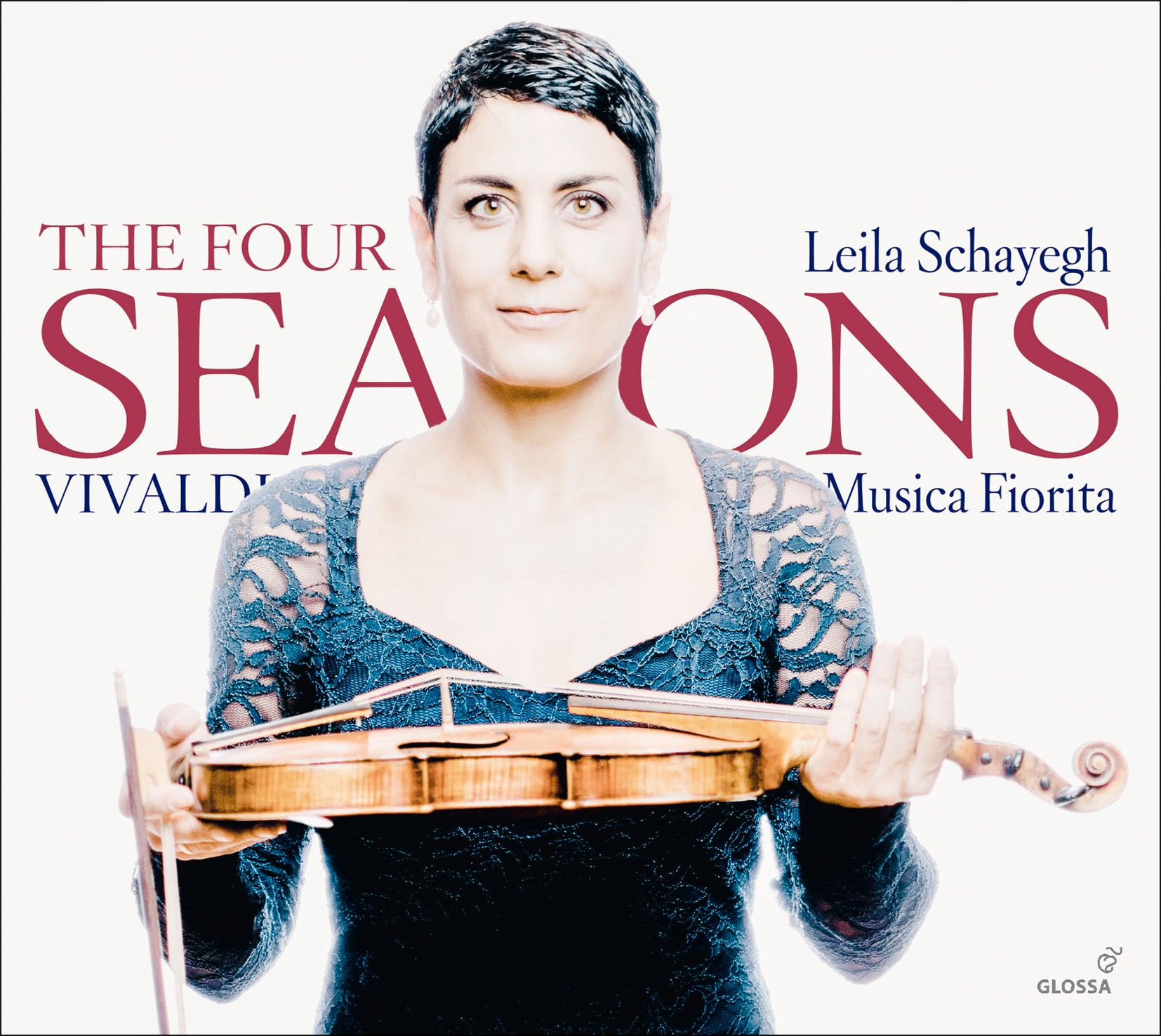 With her version of Vivaldi’s Four Seasons, Leila Schayegh continues her exploration of the violin repertory, always combining musical insight, virtuosic brilliance and historical understanding. Over the last years, the Swiss musician has become one of the leading violinists of her generation (and is helping the next one, thanks to her position as professor in the Schola Cantorum Basiliensis).

On this dazzling new exhibition, Schayegh –who plays a late 17th-century Andrea Guarneri instrument– is joined by the fine and colourful ensemble Musica Fiorita, directed by Daniela Dolci. The opera composer Vivaldi is omnipresent in all of these four violin concertos, also thanks to the use of elements of Baroque theatre: the sounds of wind machines or bird whistles contribute to making this a delightful, fascinating and “different” version of one of the most recorded works of all times.

The album also includes Vivaldi’s Follia (Sonata op. 1 no 12) and the Ciaccona from the Violin Concerto in D major. An essay by Schayegh herself and a photo series by Susanna Drescher complement a project which will be a pleasurable surprise for lots of listeners.

This one has some real colour

Recorded in the reverberantly atmospheric acoustics of Binningen’s Heilig Kreuz Church in Switzerland, and highlighted by the ravishing legato cantabile of Leila Schayegh playing a 1675 Andrea Guarneri, complete with actual twittering birds in the first movement of ‘Spring’ and ominous drummed (?) suggestions of thunder in the slow movement of ‘Summer’, which in the finale assume explosive force accompanied by flashes of lightning (sheet metal?), this is a recording of Vivaldi’s perennial favourite like no other. Onomatopoeic suggestion becomes very much the order of the day, via a captivating variety of pizzicato and arco effects that bring the pictorial elements of the music startlingly to life.

Leila Schayegh and Musica Fiorita’s fluency in Baroque music is on full display in their new recording of Vivaldi’s “The Four Seasons.” In spite of the simplicity of its themes, Vivaldi’s famed concerto cycle is quite difficult to pull off. This is partly due to the musical imagery that pervades the piece, sometimes in short bursts, sometimes spanning entire movements. In this regard, Schayegh gets points for an enjoyable and accessible performance. She lays out her intentions in a nice set of liner notes that translates Vivaldi’s programmatic intentions (originally given in four short and rather awkward “demonstrative sonnets”) into more enjoyable short stories. She takes moments of artistic license in the stories which reappear in the performance, and it is that creativity of interpretation, combined with the virtuosity to pull it off, that make this such an enjoyable album.

For example, the ensemble imagines that the dog in Spring’s middle movement (track 3) takes it upon himself to do the shepherd’s job while the shepherd naps, and so “barks himself hoarse at the unimpressed sheep.” Lola Fernández indeed plays a very convincing hoarse dog, with sharp attacks on the notes, while Schayegh adds more than a few notes to Vivaldi’s melody, as if the shepherd is restless and fidgeting in his sleep. In the third movement (track 4), the nymphs “float” around the fields, an image which benefits from an especially rich and bubbly continuo, provided by theorbo, lute, psaltery, and two harpsichords.

The group’s Summer is one of the most languorous available, as they imagine themselves out of breath and exhausted. The eighth rests in the first movement (track 5) feel like eternities, as if the heat is so oppressive that the group can barely bring themselves to play the next pair of notes, and the ensuing thunderstorm (track 7) is no less convincing. The autumnal hunt (track 10) is the perfect balance of jaunty and refined, which is to say, the ensemble has perfectly balanced staccato and legato attacks.

Schayegh’s playing deserves quite a bit of praise as well. A Baroque specialist who studied, along with the rest of Musica Fiorita’s musicians, at the Schola Cantorum in Basel, Switzerland, her playing is remarkably smooth and inventive. In the allegros, Schayegh’s phrases are long and not interrupted by the demands of the bow or position shifts. Short, fast quarter notes vibrate with appropriately subtle vibrato. In the Largos and Adagios, her embellishments are expressive and sit comfortably among a longstanding Baroque tradition. In the opening track of the album, “La Follia,” one never tires of hearing variations on the same sixteen-bar phrase, Schayegh imbuing each with a new mood. The Siciliana variation (7’00”) is especially refreshing.

Few recordings of the Seasons combine such solecistic and programmatic success with such joyful ensemble playing. Rachel Podger’s recent version with Brecon Baroque is certainly virtuosic, and rightfully won accolades for its musical creativity, but adheres more closely to tradition, with Podger less ambitious in the slow movements and the overall sound slightly sparser. Fabio Biondi’s several readings with Europa Galante may be the most similarly creative ones available, but Schayegh and Biondi’s styles are so different — Biondi rather declamatory, Schayegh reserved but elegant — and the overall interpretations so different that it would be fruitless to judge them against each other. Suffice it to say that both should be heard, perhaps back to back.

On this album, Stefano Albarello, the recording engineer and producer, gets credit for capturing the ensemble’s splendid sound, which is clear in all registers, yet deep in the bass and with a wonderful, soft resonance. He also presumably labored to appropriately mix the auditory “add-ins” the group has successfully used for dramatic effect, like birdsong to open Spring, and thunder-sheets for Summer.

Overall, this album deserves a spot on any Vivaldi or violin enthusiast’s shelf. Its originality, gorgeous sound, and impressive solo playing will keep it competitive in the rotation for a long time.

f you are a fan of The Four Seasons – and its popularity certainly doesn’t stop it from being a masterpiece – you will probably have more than one recording. One will be reliably conventional while still (hopefully) conveying the music’s elemental energy. Another might be more quirky in its summoning of the storms, dog days and festivals of the Italian countryside, good for when you want your imagination fired but perhaps with peculiarities to stop you reaching for it every time.

Leila Schayegh’s recording with Musica Fiorita under Daniela Dolci probably comes into the second category, its most prominent oddities being a brief, improvisatory violin solo to introduce each Season and the addition to the orchestra of a bird-warbler and a thunder sheet. For some these idiosyncrasies will already be too irritating to bear. But if you can listen past them, the performances begin to sound like exceptionally vivid descriptive realisations using the materials Vivaldi gave us. That Schayegh has a strong vision is proved by a charming booklet note which augments Vivaldi’s explicatory sonnets with her own impressions of the seasons in her native Switzerland, providing a level of detail and specificity that finds its way into the music with enormous charm. It means you really feel the heart-lifting reanimation of Spring’s showers and rivulets, the battering exchanges of heat and rain in Summer, the colour and excitement of Autumn, and the seductive comforts and discomforts of Winter.

In her recordings to date Schayegh has shown herself a violinist of real quality, so it is no surprise that she plays with silvery-smooth tone and sure-handed virtuosity, or that her ornamentation of the slow movements of Spring and Winter has shapely long lines. Yet I also feel that she has revealed more of her personality here, while at the same managing the trick of making the performance not be all about her. For that, the orchestra is right on her side, enthusiastic and alert to every nuance, although they may have liked a clearer acoustic, while to my ears two harpsichords, two pluckers and a psaltery is too much continuo for a single-string band. The result, though, is still a Seasons worth turning to more than once in a while.